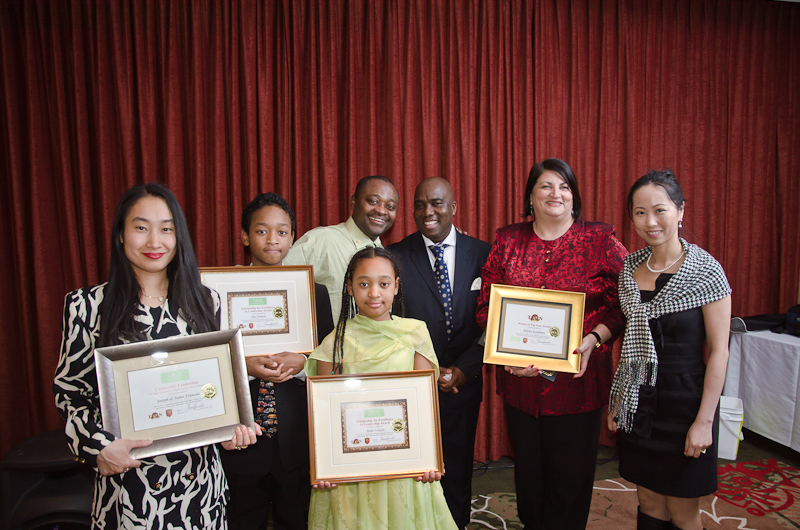 Invited guests gathered to honour both the roots of The Afro News and to mark the First Annual Sage Awards at the Hilton Hotel at Metrotown on January 28, 2011. The agenda included a reception where 70 members of the community hand the opportunity to mingle and also to meet the honourees. The awards were sponsored jointly by The Sage Foundation and The Afro News (TAN).

Introductions of the award winners and a brief history of Afro News (TAN) and of Sage Foundation were elegantly managed by Mistress of Ceremonies, Deidre Heim, TAN’s Editor-in-Chief.
A 25-minute video documentary screened at the Vancouver International Film Festival (VIFF) followed. The 2007 production, sponsored by The Afro News entitled “Chasing the Golf Dream” related the experiences and decisions of the Francois family, one of the event’s honourees.

The evening’s theme centred on the contributions the individuals made when looking after their own concerns and interests led to a commitment to the larger good of their community. Their sustained activity grew into leadership roles affecting had impact on their communities both near and far.
The 2010 Community Contribution Awards recognized brother and sister Alex and Sumie Francois, their parents Joseph & Sumie Francois, writer Helena Kaufman and The Afro News founder Michele Lee Williams.
The Excellence Awards began with a brief overview of each recipient’s biography and a presentation of a specially designed plaque inscribed with the event and the award winners’ names. In addition, the Francois family were presented with a cheque towards a scholarship held in trust for Alex and Sumie’s future education.
A special scholarship in memory of Birgit Evelyn Okoth and her lifetime contributions to the Afric and general communities was announced at the event. The scholarship will be granted annually to a young person pursuing studies and a career in aesthetics. It was accepted by her husband Michael Okoth with whom Birgit established Abantu Hair Salons.
“The presentation and the acceptance of these awards signify the interactive and constructive process at the root of both The Afro News (TAN) and Sage Foundation’s operating philosophy,” said Honore Gbedze, publisher of The Afro News, the evenings co-sponsor. In part, the criteria for the awards recognized the work of all the recipients in going beyond their economic, cultural or geographic origins to join in the efforts to build and strengthen their community, in unity.